Is the social sector really getting better at learning from failure? 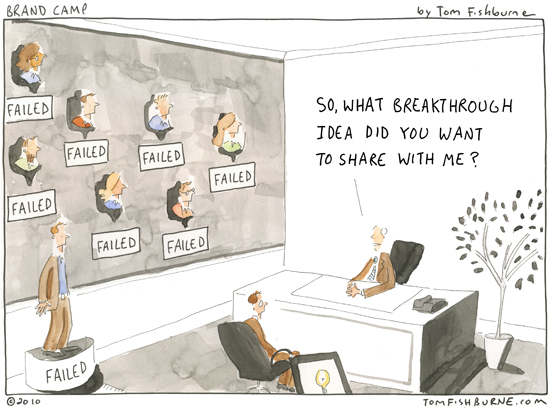 Innovation in the digital sphere can be complex and risky and there are not sufficient opportunities to share learning from failure. One year on from the Practical Strategies For Learning From Failure Workshops we asked the organising team:

Is the social sector getting better at learning from failure?

There’s a fascinating contradiction in behaviour. Whilst there are virtually no leaders who would argue against the importance of failure as a source of learning, our actions show a preoccupation with sharing success.

This cultural bias towards success runs deep. Projects are largely funded on the basis that they will all work – something that we all know to be entirely false.

Within organisations we still reward and promote based on results and past performance targets- not experimentation and deviation.

Destigmatising failure and capturing the learning will happen by organisations taking overt action rather than through inspirational leadership quotes shared happily on Twitter.

It will take establishing new teams and protocols – breaking the chains of targets with perverse incentives to guarantee “success”.

If the social sector is getting better at learning from failure – it’s doing so behind closed doors.

Acknowledging failure is a risky endeavour which has been unhelpfully constrained by risk management processes.

The formula used by public sector and business leaders is simple: admit what went wrong, apologise and move on with a promise to learn lessons.  Unfortunately this usually happens in the face of mistakes which are too obvious to ignore.  Dealing with this kind of crisis in public is more likely to traumatise a team than support the kind of reflective learning we introduced in #LFFdigital.

Another failure management process which seems easier to learn from is low risk – ‘fail fast, cheap, small’.  The uncomfortable implication is that we can never get things right enough in the first place. Failing fast requires a shift in the way we do things, threatens our credibility and our own sense of ever being able to do a really good job.

Perhaps we are not seeing an open culture of learning from failure when this is a frightening prospect for even the best social sector organisations.

What is changing are public expectations of more openness, transparency and accountability in the social sector. What may have been hidden in a report a few years ago is much more likely to be subject to scrutiny and comment through  social media. Trust in organisations whose stated mission is social good can be seriously damaged when there is a reluctance to admit they have not achieved what they set out to do.

Whilst there seems to be consensus about the need to share learning from failure many organisations are working in a competitive funding environment which does not encourage this to happen.

Funders and commissioners have an important role in sharing the learning and also quantifying the real costs of failure in terms of missed opportunities, bad investments and continuing to make the same mistakes.

It is time to use the digital tools now available to provide real time data and analysis about whether projects have achieved their anticipated and desired outcomes and impact.

Moving from a long standing public service culture of not dealing failure as an inevitable consequence of working in complex situations, is a huge shift in human behaviour.

Pervasive ‘social practice’ is generally one of; minimise the risk and ‘don’t talk about it’.

We behave to fit in with social practices in an unconscious, automatic manner. Shifting the burden of dealing with failure off the individual and making it part of the social practice is something you could argue the aircraft industry has achieved.

Over the last 18 months however, I’ve observed more people talking about failure as something we should recognise and work with. While this is a long way of a large scale behaviour change it is helpful in changing the ‘meaning’ around failure. If the ‘meaning’ (the unwritten rules, social taboos etc) start to shift, there is a chance we can start to change the ‘social practice’ around failure.

Are we getting better at learning from failure?

3 responses to “Is the social sector really getting better at learning from failure?”