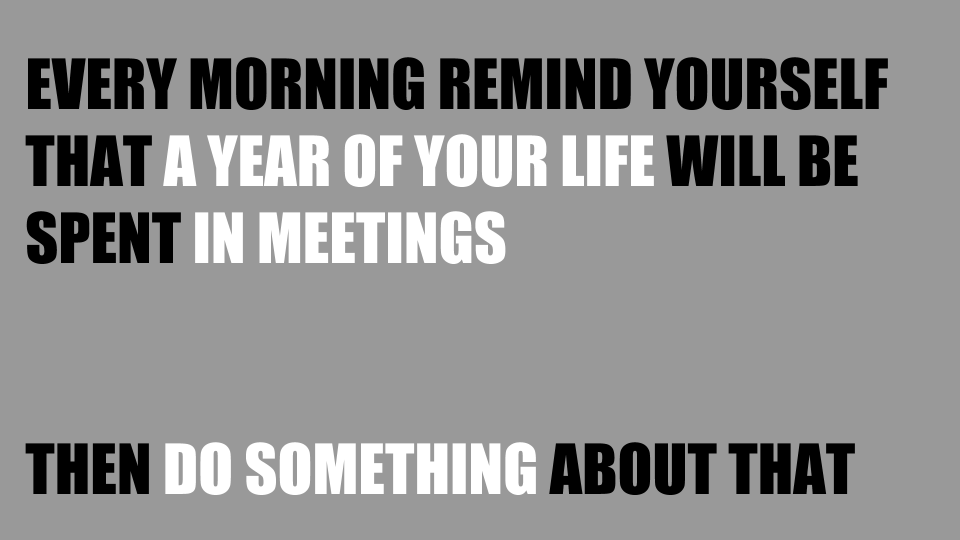 We thought the world of work was to be reimagined. The death of the office. The end of email. A utopia of work/life integration fueled by work-where-you-want technology.

Six years ago 2.8 million people made daily commutes of two hours or more. In 2016 that’s risen to 3.7 million.

People report attending an average of five meetings a week with over one third saying they are unproductive, admitting to checking emails, Twitter and even Tinder.

And despite unprecedented access to virtual tools – our actual productivity has slumped to the worst level since records began.

Is it possible to spend a whole year in meetings?

In 2014, a research team from Bain and Company used data mining tools to analyse the Outlook schedules in a large company. It concluded that in one calendar year the organisation spent 300,000 hours in meetings.

Given there are only 8,760 hours in a year that’s quite some feat.

It’s because of what they termed the Ripple Effect:

What if every meeting we had kept a real time counter of the salaries in the room, increasing minute by minute?

If you’re brave – try running this meeting calculator at your next one. Even if you run it based on the average UK wage the results are eye watering.

We all know we can be better than this.

Work can be better than this.

In the current incarnation of Bromford Lab we’ve abandoned meetings altogether, even weekly planning. We run our work through Basecamp which prompts us to answer “What do you plan on working on this week?”.

We get a daily prompt to ask what we’ve completed and can answer it at our convenience.  The productivity , or sometimes lack of it, is visible for us all to see.

Technology is not to blame. It’s our failure to adapt our leadership for the digital age.

We still have a tiny percentage of leaders who are really living a digital lifestyle. There are still relatively few having open debates , showing transparency in public discourse , answering questions online and sharing progress.

Until there is a monumental shift in the leadership dynamic from the old fashioned command and control to a collaborative, status free, matrix way of working, then we will still have all those meetings.

The challenge is spotting the friction and noise that is dragging us back to 20th Century management behaviours – and then personally doing something about it.

Technology didn’t fail us. We failed technology. And it’s our job to fix it.

I’m a facilitator, innovator and designer. I work with organisations to identify problems and solve them in ways that combine creativity with practical implementation. I have a track record in project delivery and service change that crosses all disciplines and has resulted in millions of pounds in business benefits. This work has resulted in numerous acknowledgements and awards. Seven years ago I established Bromford Lab as a new way for the organisation to embrace challenge and adopt a ‘fast fail’ approach to open innovation. Nearly everything the Lab works on is openly accessible at www.bromfordlab.com. I'm a regular contributor to forums , think-tanks , and research reports and a speaker or advisor at conferences and events. View all posts by Paul Taylor

5 thoughts on “Technology Won’t Kill Meetings – But We Can”

Leave a Reply to Have we just been doing meetings all wrong? | John Wade Cancel reply