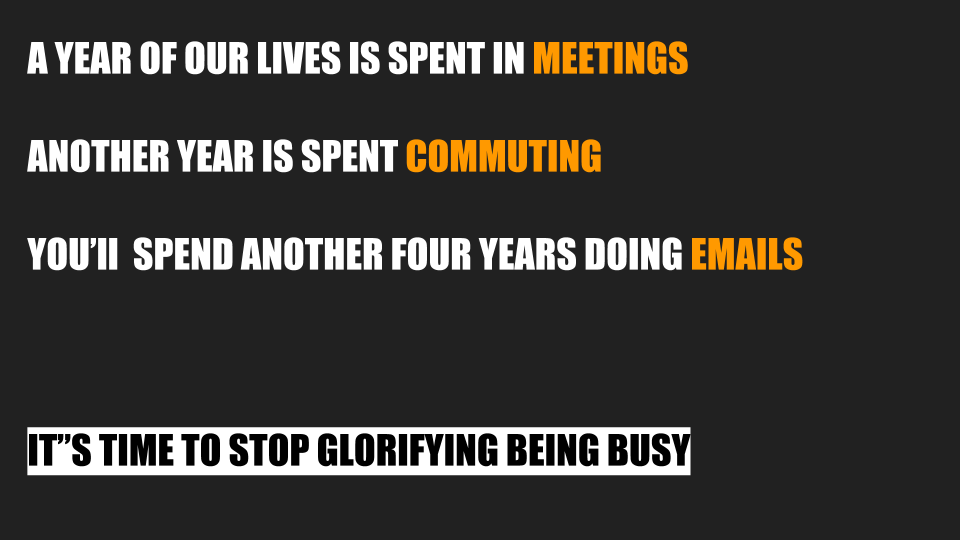 Last week I was getting a drink when a colleague asked me “So, you busy as usual?”

I took a second to avoid my kneejerk affirmative response and went for it:

“No – we’ve decided to slow down. Give ourselves some time to really think about things”.

They looked at me like I’d lost my mind.

In the world of work, more and more of us have bought about the prominence of an unusual status symbol: seeming busy.

But we are busier than we used to be, right?

No – we are not. In fact we are working less than we did 20 years ago – whatever it might feel like to you or I.

We are undoubtedly working in a new reality, one where we now have the distractions of machines to add to those of people. Being busy as a status symbol though is a modern phenomenon.

Thorstein Veblen suggested in 1899 that living a leisurely life and not working (the “conspicuous abstention from labour”) was the most powerful way to signal your status.

However a study earlier this year challenges whether that represents our modern reality. It explored cultural differences, finding that busyness at work is associated with high status among Americans, with the effect being reversed for Italians, who still view a leisurely life as representative of high status.

I recommend listening to the Oliver Burkeman shows that explore the way we fetishise being busy. You’ll recognise the stories of people complaining about the size of their inbox and all the meetings they have to go to.

It’s easy to say you’re too busy. Even when you’re the one to blame for it.

As example I’ve kept up a pretty good blogging schedule this year — usually every week or so. I’ve had a gap for the past two weeks —  and I could blame being been too busy.

But just like eating the right food, reading more books and exercising – busyness is often just an excuse for lack of discipline.

I like not being busy and I’m proud of it.

I resist being busy at every opportunity.

Busyness for me — and telling people I’m busy — is a sign I’m being undisciplined and unproductive.

Worse still — busyness makes you lose self-awareness. Telling other people how busy and important you are means you start to believe it yourself.

Here’s what makes me busy:

Sending lots of emails (you just get more mails back)

Although we don’t like to admit it – we have a lot of control over our own busyness and the busyness of others.

Someone recently told me that they checked their colleagues diaries to “see how busy they were”.

The implication was clear — busyness was being directly equated with productivity.

The colleagues whose diaries were full , a sign that they say yes to everything, were lauded.

Those engaged in purposeful contemplation or those just getting stuff done were not.

In the space of 50 years the workplace has become overwhelmed with management theories on how to run a better organisation.  It can’t be a coincidence that the growth of busyness has come at a time during which there has been a growth in management.

Not for nothing does the world’s most valuable brand eschew management fads and concentrate on getting the basics right. All staff at Google have to learn how to run meetings, have conversations, and set goals.