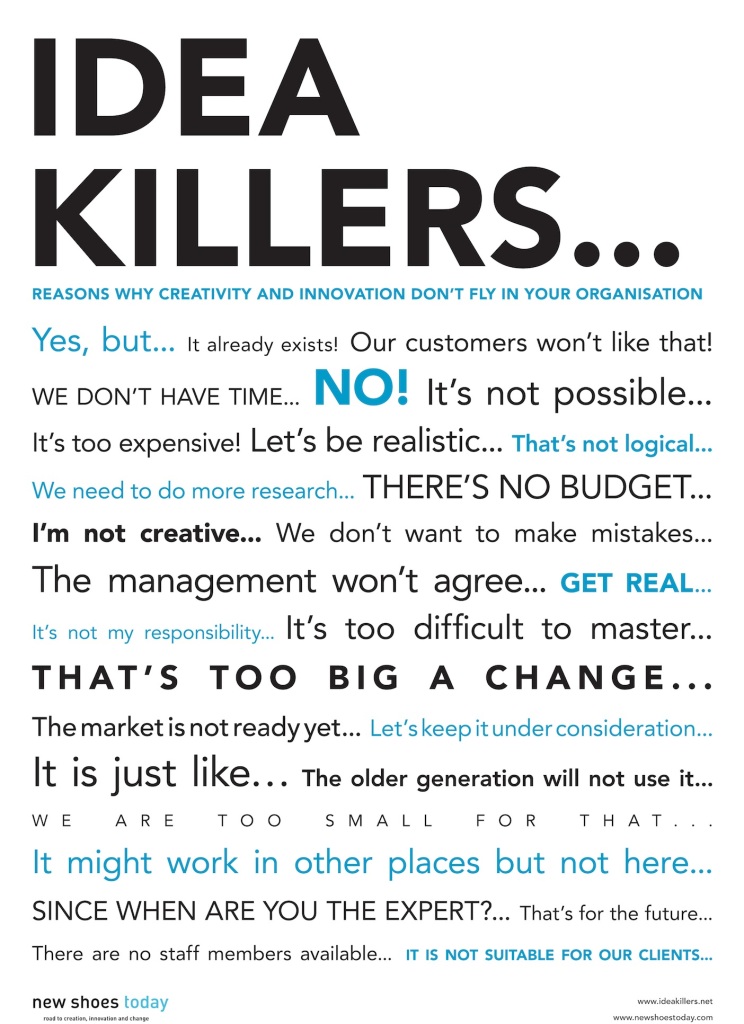 Many organisations , without realising it , act as inhibitors of innovation.

Rules and protocols are put in place – often for very good reasons – that preserve the status quo.  Over time, organisations develop a set of social norms – ‘the way we do things around here’ – that either promote creativity or quell it.

Our employees generate ideas every single day about how their job could be done more efficiently. These ideas – thousands over the course of a year – mostly disappear , never to be harvested.

It’s a chronic waste of knowledge that organisations must make it a priority to unlock.

The odds of a turtle hatchling reaching adulthood are said to be 1 in 1,000. But in most organisations the chance of an idea reaching maturity has significantly worse odds.

As I detailed in my last conference slot – getting your organisation innovation ready means facing off three of the biggest threats to the survival of ideas.

Meetings are the number one idea killer in any organisation.

Meetings can crush ideas. They are all too often a corporate power play where ego runs rampant. People want to look like they are adding something in meetings and being hypercritical is highly valued. Putting your freshly hatched idea in that scenario is asking for trouble.

It might have been a bad idea. It might have changed the world. We’ll never know – because someone just beat the hell out of it.

I’ve been in meetings where senior leaders have debated the pros and the cons of an idea (usually the cons) that hasn’t even reached proof of concept.

Solution: create a space where an idea can take its first few breaths without someone trampling all over it. Let it come to life in a nurturing environment where we can see if it solves the right problems.

And keep managers out. There is evidence that managers can undermine employee creativity through interference – changing goals and getting over involved when they should just steer clear.

Only present it to a meeting after a test has demonstrated it’s actually worth doing. Arm yourself with evidence and a working prototype.

Most corporate structures are uniquely designed to ensure that any decent idea never goes near the top table.

Think about it. Any idea that emerges closest to the customer has to work its way up through a series of managers, any one of whom is likely to veto it. As David Burkus points out, research suggests that there is a cognitive bias against new, innovative ideas – a “hierarchy of no”.

The higher an idea moves up the chain of command, the more likely it is to be rejected, as the people furthest from the idea’s source will have a lesser understanding of its potential value.

It’s going to be difficult for any of us to abandon our organisational structures – but there are ways you can create a “hierarchy of yes.”

Ideally you’ll have the resources to establish an Innovation Lab or Intrapreneurship programme , but in truth any of us can create a virtual space that brings together innovators.

Internal social networks are great places to crowdsource ideas without being tied to the traditional corporate system.

Bypass the middle management ground and go straight to source.

Provocative ideas and posts will help identify innovators who you can work with to bring about change. It’s important that any informal group you establish is non-hierarchical. Swarming around a problem with very disparate points of view is often where the magic happens.

If that all fails just take this advice from Helen Reynolds: adopt guerilla innovation – just don’t tell anyone what you’re doing.

Job Descriptions are a much underrated enemy of innovation.

They encourage people to play it safe, keep their head down and do the very minimum. They are essentially a one pager on how not to be sacked – an insurance policy against someone screwing up.

However the effects of traditional JD’s are far reaching. They discourage risk taking and imagining better ways to perform the role (such as making it unnecessary in the first place.)

Job descriptions are like organisational treacle. They cause inertia because the moment employees are given specific responsibilities they expect them to stand still. Forever.

Additionally JD’s encourage organisational silos. They demand that people only think of the service from their point of view , rather than how the entire organisation impacts on the customer.

There are a number of solutions here.

The first is to abandon job descriptions altogether and move to a system of role priorities. Too radical for the public sector? Not really. Redkite Community Housing have recently done that very thing.

Secondly you could stick with JD’s but sex them up – making it clear they are actively working against the status quo. You can read more in my top five rules for job descriptions.  Disclosure: I do have a JD (although I’ve never read it to be honest).

The most achievable way of breaking away from silo thinking is to establish a way for colleagues to pitch ideas that benefit the customer. Establishing one point in your organisation that evaluates and acts upon bright ideas from stakeholders, customers and colleagues is the simplest way to make innovation part of everyone’s job.

Our environment is increasingly volatile, uncertain, complex, ambiguous and interconnected. We can’t afford to have our organisations stifled by the protocols of a very different age.

It’s not necessary, or even possible, to completely remove these three idea killers. But knowing your enemy , and developing strategies to avoid these pitfalls, will boost your capability for innovation.

I’m a facilitator, innovator and designer. I work with organisations to identify problems and solve them in ways that combine creativity with practical implementation. I established Bromford Lab as a new way for the organisation to embrace challenge and adopt a ‘fast fail’ approach to open innovation. Nearly everything the Lab works on is openly accessible at www.bromfordlab.com. I'm a regular contributor to forums , think-tanks , and research reports and a speaker or advisor at conferences and events. View more posts