According to Clayton Christensen , of the 30,000 new consumer products that are launched each year – 95% fail.

Compare this with the public, voluntary and non-profit sectors – where hardly anything fails.

The social sector must either be fantastic at launching new initiatives, or there’s a lot of things going on that shouldn’t still be living.

Scott D. Anthony has defined the organisational zombie as those initiatives that fail to fulfill their promise and yet keep shuffling along, sucking up resources without any real hope of having a meaningful impact.

They may be started through the best of intentions, but for all sorts of reasons they are failing. Just no-one wants to admit it.

George A. Romero , who sadly passed away this week,  created a defining trilogy of horror films between 1968 and 1985.

They were audacious for the time – he cast a black lead for his first film, released the same year Martin Luther King was assassinated.

Far from being splatter movies – they were stories about racism, consumerism and militaristic aggression.

Ultimately the message from Romero was this:

Zombie projects occur when all these factors converge and confirmation bias sets in. Even though everyone knows this isn’t really working, we carry on regardless.

As Paul Hackett said this week  , the social sector can get pretty much get away with poor decisions without it impacting turnover. In other sectors the share price takes a hit and executives get sacked.

The lack of a conventional market, and no customer walk away point, means projects can be propped up artificially using someone else’s money.

We need to refine our skills at spotting and killing wasteful activities.

In the movies and TV the conventional way to stop a zombie is to drive a sharp implement into the brain of anyone who shuffles along aimlessly.

As tempting as that is for those of us who’ve endured endless meetings – we don’t need to take such drastic action.

In an era of scant resource and unmet need, spotting zombies is a vital part of leadership. Innovation is happening faster than we can adapt to it – and freeing up resources is vital. Investment must equal impact or we are simply sabotaging our future.

As part of the work we’ve been doing on Bromford 2.0 we recognise that slaying zombies is just part of good governance. Innovation is all about discipline in the creation and implementation of new ideas that create value.

However it’s all about stopping doing things too. As a general rule each new service or activity should lead to the decommissioning of an existing one.  We’ve designed this principle to ensure we stick to it: 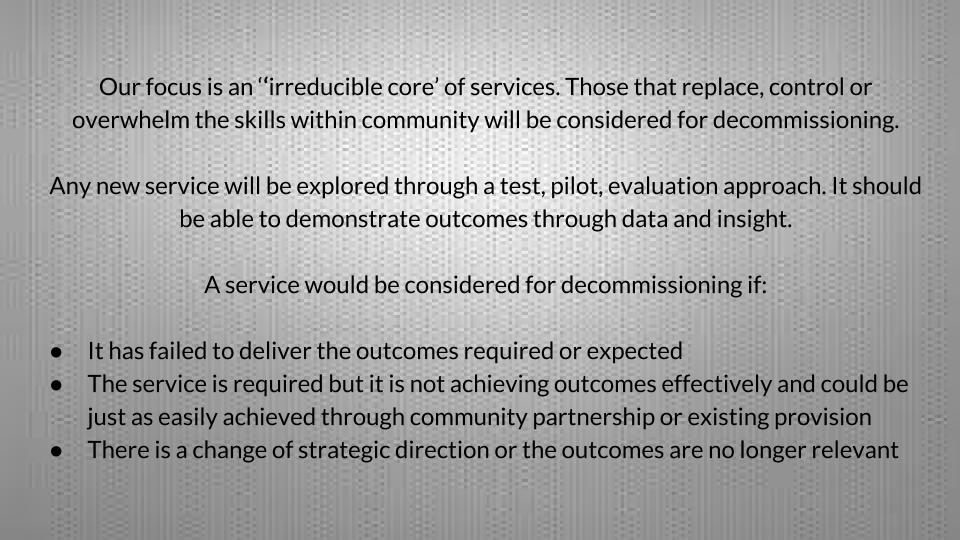 People are losing faith in institutions as they are not seeing the kind of social outcomes they expect.

Today it’s the execution and impact of innovation and change that really matters rather than the cheerleading.

There needs to be as much enthusiasm for stopping the old as there is for starting the new.

7 thoughts on “How To Find And Kill Zombie Projects”